One long-time local, Reg, from Bourne Road told me in 2017, that when he was a boy he used to cut across the brickfield and through all the piles of dumped rubbish, as his family lived in Cannon Road, and he attend Raglan Road school.

He and the other lads would look through the rubbish discarded from the little model railway factory, (which was where Excel house now stands by the railway, on the corner between Homesdale and Godwin Roads) in the hopes of adding to their own railway sets (or selling re-usable parts).

One teacher he particularly remembers is a Mrs Evans,  They called her “Creeping Jesus” because she would appear silently behind them, and when they were not attending to their school work, and hit them across their hands with a ruler.

He remembers a bakers on Havelock Road that they frequented.

Two families he remembers living in Havelock Road, and having loud remonstrations on Fridays nights, were the Crisps and Danhers. 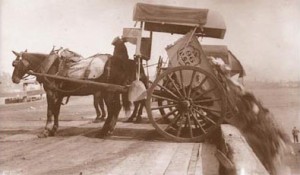 At that time, most pupils attended Raglan Road until they were 14, and some of their lessons were in one of the school extensions, the one behind the Hayes Lane baptist chapel on Hayes Lane (I think it’s now a pupil referral centre).  When they had to get back to the main buildings for the next lesson (or registration at 4pm), and one of the horse drawn rubbish carts was coming up the hill, he and his friend would run out – without the driver spotting them – and hang on the back of the cart.

Sometimes, when they got to the main road, a public spirited soul would tell the driver that the poor horse had two hangers-on at the back and they would have to jump off.  Other times they would get a lift all the way to the Havelock Road entrance to the dump and then they only had one road to walk back down.