On November 9th, 1940, a German Heinkel bomber was shot down by anti-aircraft fire, and when crashed it on Johnson Road, demolishing numbers 26 and 28 houses. 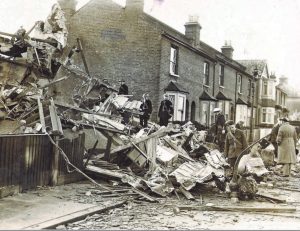 In one house, belonging to Mr and Mrs Monday, the husband survived but his wife was found to be dead when they reached her.  In the other house, occupied by Mr and Mrs Button, they had a remarkable escape from injury.

“The awful truth dawned on everyone at the scene that the whole street faced disaster. As minds worked on how best to tackle the situation, Sergeant David Grigg, a traffic patrol man of P Division, Metropolitan Police, arrived on the scene and volunteered to remove the missiles one by one to open ground across the A21 Hastings Road. One of the bombs was thought to be ticking ominously, but Sgt Grigg nonetheless gingerly carried them to a safe distance from the street’s terraced dwellings.”

RAF sergeant Grigg was awarded the George Medal for his brave act in March 1941, cited that he “showed great courage and devotion to duty.” Captain Charles Lea of the 2nd Engineers disposed of the bombs, for which he was awarded the George Medal (but was later killed in Salerno) “by skilful and courageous work, he completed the disposal of all the bombs, so making it possible for the rescue of the trapped persons to proceed”.  A third George Medal was awarded to the New Zealander head of Bromley casualty services,  Dr Kenneth Tapper, who treated the casualties in the debris pile, between the un-exploded bombs, “Dr Tapper has shown great gallantry in his efforts to relieve suffering amongst air raid victims.“.

Of the aircraft crew, two perished inside the aircraft whilst the pilot’s parachute never opened and he was found dead on a local roof, and the navigator parachuted to safety near Sundridge Mansion Hotel where he was apprehended and taken to the police station.  Part of the machine was found in Bromley Common Cricket ground. 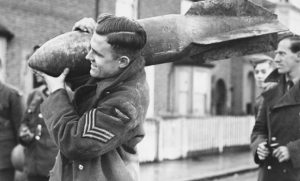 Thanks to Brinley Hawkins for discovering and sharing this images

Another neighbour, a stretcher man, Mr Darby, described what he saw to a reporter: “My brother was standing at the back door when he heard the aeroplane coming down, and thought it was a bomb.  It sounded like a tornado; he shut the door and threw himself down.”

He and other neighbours removed what bombs they could from the wreckage though there was petrol over all the debris.  The ‘Rescue Squad’ discovered Mr Monday lying on a bomb and the Bomb disposal squad then removed the rest of the bombs after the local area was evacuated – in total there were 30 bombs, 50kg.  Several thousand rounds of ammunition was removed from the plane.

The reporter continues: “Mrs Button was at the kitchen door and her husband pulled her to safety as their house collapsed.  They both crawled out unhurt.  Both are over 70.  Mr Button, and old soldier, went back and turned off the gas at the mains”

A fuller description can be found on this Chatterton Road history page. 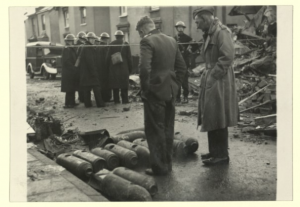 Thanks to Brinley Hawkins for discovering and sharing this image