We have some fascinating memories and oral history in our page: Community Asset for 20 years , along with some great photos!

Our local road names recall some of the famous people and places in our imperial past, that were popular at the times the roads were built: History of our Local Road Names

History of the Brickfield and Local Area

With thanks to Tony Deary, who did vast amounts of research in the Local Studies area and the internet, Felix for his work, and especially all the people who have composed and contributed their recollections of our park.

Bromley Common’s early cricket ground is believed to have been in the area of Brick-Kiln Lane (now Homesdale Road), where a connection can be made with the local game and the Norman family. George Warde Norman (1793 to 1882) mentioned in his memoirs that he played there. He was a member of a family which had extensive lands around the south of Bromley, including Bromley Common. The Norman family name is continued locally, with a large local park being named after the family.

In 1940 in particular, Havelock Road suffered considerable bomb damage in the Blitz. The block of flats now occupying numbers 24-41 Homesdale Road are the result of an arial mine. This explosion also destroyed the chicken cabins at the back of 21 Havelock Road.

1953 and the transformation into a community Recreation Ground: 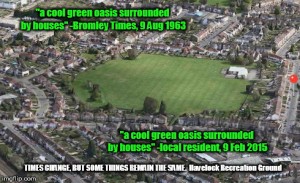 “Bromley’s new oasis … what was an ugly brick works and later a tip for the local Gas Board, has now been converted by Bromley Council in to an attractive stretch of grassland which, during the long summer weeks of school holidays, should be a boon for mothers in the Bromley Common area”