Down Raglan Avenue, just before the bend.

Stop 3 – Of brick-workers houses, and the brick-pit of J.J. Peill. 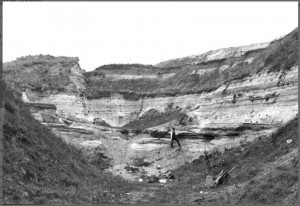 Peills Pit in 1924 when it was being worked. Note geologist J. Rhodes, and wheelbarrow.  At the top is the chalk pile along where Bourne Road is now.

Narrator:  You might have noticed the long grass on the left as you came down the path.  This is our meadow area, where the grass is only cut once a year, to encourage weeds – no I mean wild flowers – to grow.  Even in the first summer, we noticed butterflies that had never been there before.

Phil:  Now look back the way you came, and you can see the rear of the Victorian terrace houses of Havelock Road. When you get to stop 9 you can look back and see how similar they all are.   The houses on Havelock road are older than the surrounding streets, and they were built for the brick workers. You can see the supervisor’s house, with the extra storey at the top (on the right-hand side of the Havelock Road entrance). 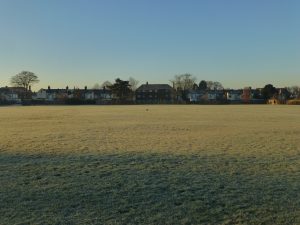 View of the terraced houses of Havelock Road

Jo: It is unlikely that these houses were built with the pit’s more expensive kiln-fired bricks.  Normally workers housing had cheaper bricks make in a clamp in the middle of the road; This process produces a large number of over-cooked burnt bricks and under-fired bricks, which were then used for interior walls.  Houses in Havelock Road have these over-fired and fragmentary bricks for the inside walls.

Narrator: The photos in the British Geologic Survey’s archive, taken in 1924, noted that the pit produced ‘white’ bricks from a huge pile of chalk at the Bourne Road side of the site.  The white bricks can be seen fronting the more up-market terraces along Southlands Road.

Sandra: Eventually they had dug all the clay out of the pit, and then started extracting the sands and gravels of the Blackheath beds underneath.

Narrator:  Brick workers were known as a rough bunch, and apparently no Friday night was complete without a hullabaloo and fight on Havelock Road !

Narrator: Continue down the made path until you reach the Homesdale Road entrance way and the next stop. 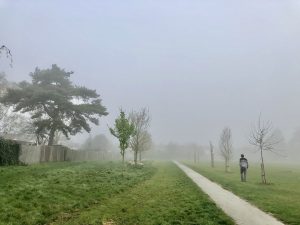 Havelock Rec is in the London Borough of Bromley, United Kingdom.

Start at the noticeboard, at the Havelock Road/Wellington Road entrance to the park, where the driveway to the nursery is.

Narrator:  This audio guide looks at some of the heritage and memories of this park, affectionately known as the “Brickie” or “Brickfield” to locals.

The trail takes you around the outside of the park in a clockwise direction from the here, the main entrance, off Havelock Road – so listen in, take your time and stroll around the park. 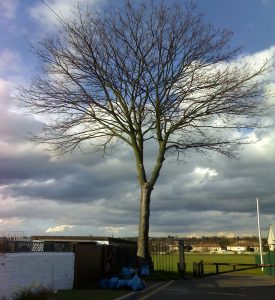 Phil:  Look over the park in front of you. It’s hard to imagine, but this was a ramp into a huge pit, supposedly 60 feet deep.  Then look at the edge to your left – in the summer this is greener than the rest of the park because, under the ground here is the London Clay – whilst the middle is all rubble infill. 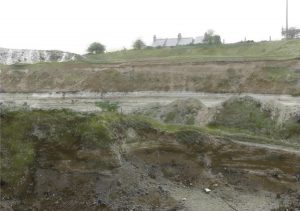 Tinted photo of Peill’s Brick pit now Havelock Rec with the houses on the SE end of Bourne Road in the background. Original is BGS asset 16386.

Until the 1830s the whole park was some fields on clay soil.  The clay was laid down under the sea 70 million years ago, when England was close to the equator, where it was similar to present day Thailand and Malaysia (somewhat hard to imagine!) – and – we were just offshore from a mangrove forest!

If you go to the cliffs north of Minster, on the Isle of Sheppy, where there is also London Clay, you can find fossil seeds, fossil crabs, fossil sharks teeth and fossil stemless palm seeds on the beach.  The stemless palm tree only grows in the tropics, so the discovery of these seeds gave the Victorians a headache – how could London have ever been in the tropics? Was there some kind of super-warm current coming up from the Tropics – even warmer than the Gulf stream? Or had stemless palm trees evolved and in the distant past they could grow where there are frosts?  Nowadays we understand that it was Continental Drift and that the continents move slowly across the crust of the Earth. 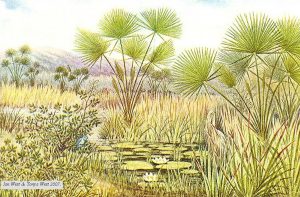 Narrator: Go into the park and just past the container, go a short way down the path between two rows of trees, that we call Raglan Avenue.

A short way down Raglan Avenue, by the twin-trunked Silver Birch tree.

Stop 2 – Of the Old Bay Tree, the Brick pit and Brick Making

Narrator:  Look in front of you, on the left, for the large (evergreen) bay tree. One of the earliest records, in the 1850s is of a farm on Brick Kiln Lane (the old name for Homesdale Road) just north of where Havelock Road is now, with a large bay tree – which still resides in one of the back gardens of Havelock Road. 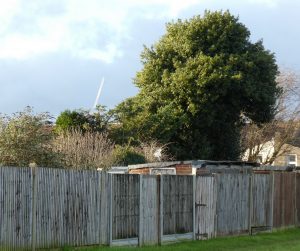 The old bay tree, mentioned in sale documents before the brick pit in 1860

Phil:  From the 1860’s to 1934, clay and gravel was excavated from the brick pit. The Brickworks and kilns were situated where Mornington Avenue and Waldo Road are now.

The brick-pit belonged to Mr Coles-Child, Lord of the Manor, a coal-merchant from Deptford, who had bought the Manor of Bromley from the Diocese of Rochester.  He expanded the pit from the existing small one (about where the dip is now) on Brick Kiln lane, into a large area – not just did it cover the whole of the park, it stretched all the way up to the south side of Waldo Road.   The Brickworks themselves are now the Waldo Road Waste Transfer Station. 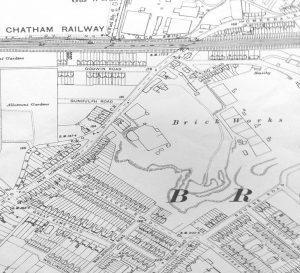 1909 Ordnance Survey map of the Brick pit and surrounding roads

Sandra:  A condition of the railway passing through the Lord of Manor’s land, was it was to be on attractive brick arches, and using his bricks (this included the ill-fated ivy bridge, local historian Max Batten has described the Ivy Bridge disaster at Wendover Road on our website). These arches were buried by a cheaper embankment when the 2nd line went through (and Coles-Child was no longer on the company board).

Narrator: As Lord of the Manor, one of Coles-Child’s public-spirited projects, was to build a “new town hall” in Market Square.  He funded it, so it was built from ‘his’ bricks, from our brick-pit.  It contained the town’s first fire station, first police station, first library and an upstairs meeting room…. but it was never used by the body who ran the town, so was never actually the town hall.  By the1930s the high street was so congested that both the town hall and the ‘island’ row of buildings on the east side, were demolished, and the current square laid out, in 1933. 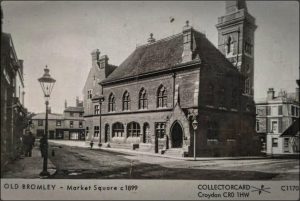 Postcard in 1899 of Old Town Hall, built in Elizabethan style Arts and Crafts architecture from the Brick-pit’s bricks

Andrew, reading a memory from an Anonymous Gentleman: Before this [that it was a dump] my Grandad used to work in the Brick pit, building bricks, and this is why it was originally called Havelock Brickfields.  It was a large hole until it was used as landfill of the wartime bombing rubbish.”

Narrator:  Continue down the made path until you reach a young sweet chestnut tree on your left (the tree before the well grown young oak tree)