Marisa told me in 2015: The brickfield was already a grassed playing field when I moved here in 1959, but the lady down the road, who had moved in 8 years earlier remembered it being grassed over.  The work was done by the contractors, the McIntoshes.

I was told that in the war there were two big guns (anti-aircraft) in there as it was a very big pit. And, there was half a house left (from the WW2 bombing) at number 43 with all the children playing in it. 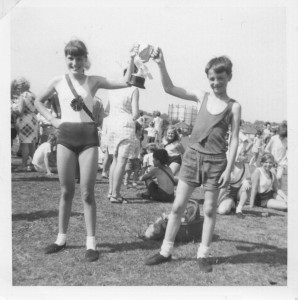 Every year at the end of the year, Raglan school would have a sports day on the brickfield, and my Maurizia was the champion running one year.

At the weekend, the Raglan boys used to come and play football with the teacher.  We used to go there in the evening as a family and play tennis and badminton.  My Maurice would never allow us to picnic on the other side of the field, it had to be in our corner.

The Brickfield was left to the children of Raglan Road School, and the council was to look after it on their behalf.