My memories of my early life are still so vivid it’s as if we never left, there is so much to tell. You mention the mounds of rubbish and rubble, so I’ll start with that. Much of it was the damage from the bombing during the war. In one place was a large mound where the lorries from the gasworks sometimes used to come and tip the clinker and byproducts from the gas works. Often the local lads used to go and collect bits of coal and coke. It earned quite a few of us a fair bit of pocket money.
One particular occasion was when a large general store in the market square was bombed. It was I believe called Edward Isard, much of the rubble was also tipped over there.
Some of the local Mums soon spent some time over there recovering molten bars of soap and other items. However, back to the brickie. My older brother Bob spent some time in hospital with a badly burnt foot, caused when the mound collapsed. the heat generated by spontaneous combustion was terrific. But to younger kids it was the most wonderful playground.
Many of the kids camps were either in the huge patches of Burdock that used to grow there or the older ones made quite large more permanent structures out of the abundance of water tanks.
“God Help You” if you ever went near or touched a camp belonging to another street. Among the rubble there was a constant supply of asbestos sheets that when thrown on any of the numerous bonfires resulted in loud explosions. Be assured I am in no way fantasising or exaggerating, To young kids it was the most fantastic playground you could ever imagine with new material being tipped there on a daily basis. Quite often there would be tipped a tanker of a creosote like product from the local gas works. It lay in the ground like tar. Many a kid had a good hiding after going home with it on your boots, after a couple of days the soles of your boots just fell off.
Every November the competition to build the largest bonfire caused many a fight as it was almost a nightly job to nick stuff from anywhere you could find. There was always a large one near the Walwyn road entrance.
Reading your oral history brought up just a few of the local names. My grandmother lived at No. 13 Havelock Road, next door was the Crist family of boys from the top was Jackie, Johnny, Dougie and Leslie. A little further up in the last house before the bombsite lived George Aveling and his sister Flossie the other side of the bombsite was the Matholie family and the last house lived Sheila Jarrett Then there was Mr Clapsons Shop (General Store). Directly opposite on the corner of Marlborough lived the Shaddocks family next door to the Danahers Billy, Monty and twin boys, pretty sure there was a sister Margaret also. Coming back down Havelock there was the Luck Family and the Wiles sisters Sylvie and Betty. A few doors further was the Phillips family (quite large in number) I remember the oldest George I believe joined the Guards. Then came Ray Brigden, cousin to Teddy Brigden who lived opposite me in the cottages in Homesdale Road Ted sadly died last year. Next door lived Neville Stubbs who had a printing business and shop in Homesdale Rd. Also his sister Lorna.
The Model Railway Factory you mention was located at the top of Homesdale but on the Main Road and was called Graham Farish. They are still in production and are at the top end both in quality and price. There is a stockist near me in East Grinstead called Martells 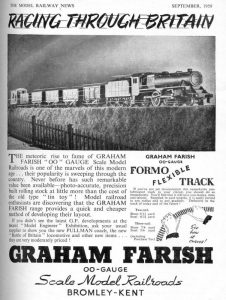 I know I’m flitting about somewhat but you mentioned free coke ? If there was any it never came my way !!  It was regular pocket money for a lot of us. My dad made me a purpose built barrow that took 28lbs of broken coke (that is what you had to ask for when queuing at the window in the gas works). From memory you could get a small coke, broken which was larger lumps and then boiler nuts (they were a form of compressed coal dust and something else) they were the most expensive and burned very hot.
The Gas Works was I believe run by a Mr Skudder  who lived in a house just inside the Main Gate and the ticket windows were further along on the left. You bought your ticket and one of the prisoners of war would take you with your barrow under the hopper and dispensed your measured amount. They, the POWs, would be all over the place driving low trucks called Lister trucks.
I had a regular delivery to the lady next door at No 109 Homesdale called Mrs Stokes, her husband was the manager of a large Ironmongers in the High Street called Weeks, Manager or not, he still had to come in the house through the back door AFTER HE HAD CHANGED INTO HIS SLIPPERS AND CLEANED HIS SHOES FOR THE FOLLOWING MORNING. But she was very kind to me. I still remember her giving me a lovely shiny Half a Crown for my birthday in 1943  I dropped it between the floor boards when we were hiding in the cupboard under the stairs.
My parents continued to live there until my mother died and i moved my father to live near me in Crawley He sold the house to a Mr Hennesey in 1986, I often wondered if he found my half Crown.
I think it’s time i stopped rabbiting on but if you are still interested I can clearly recall the Mornington and Walwyn Crowd  And many of those from around Bourne and Jaffray Rd
Quite apart from the Homesdale road lads. Has any body mentioned the large Horses and their tip Up two wheeled carts that used to tip in to the brickfield? They were stabled in Old Homesdale Road at Mackintosh’s Yard  The Night Watchman during the war was a Mr Jerry Hodder From Waldo Road He would sometimes roast a potato for us in his fire.
Peter