First Draft of the Havelock Rec Management Plan (extracts from)

These are extracts from the first draft (November 2018) of our management plan. It only contains the bits thought to be of more interest to park users, as they already know where the park is, how large it is, and can look at the Friends objectives elsewhere on the website.

This is the first management plan for Havelock Recreation Ground.
It is expected that it would have minor revisions every 2 years.
The layout attempts to be concise, with appendices to explore information, such as survey results, policies, and census data, in full.

2.1 Aim:
The intention is to prepare a plan to develop a strategic and practical framework to improve the park for all parties with an interest.
The purpose of this plan is to:
* Identify, discuss and resolve issues relating to park infrastructure, park users and available resources
* Describe the method of managing and maintaining Havelock Recreation Ground
* Identify and address who is responsible for specific aspects of management and maintenance
* Deliver a benchmark against which delivery and performance can be measured.
* Share knowledge and experiences

2.3 Authorship:
The plan has been drawn up by Kerry Hood from the Friends of Havelock Rec (FOHR), with the collaboration of our committee and the chair Emma Prescott. A template was provided by Caroll Long (as cited on this Friends Forum list) the park’s officer at the council contractors, Idverde.

2.4 Consultation:
Park users were surveyed so that they had a chance to input into the process. Initially this was by interviewing them on the field, later by featuring on the Friend’s website. Though the local businesses, including the Nursery leasing part of the park, were reached out to, none of them responded.

The park is in the SE corner of the Bromley Town ward. The surrounding roads are inhabited by a blue/white collar, white and mixed race people.
These are the roads that many of the park users live in:

The columns are from the survey results of (1) the 70 results in 2018; (2) the 2015 one for the village green application of 90 results. Homesdale road is characterised by a lot of flats; some older ones above the shops, and many in the new blocks (since the year 2000) at the A21 end.
Census data was obtained from Streetcheck website, who had already categorised it. It was collated over several of the census areas close to the park (see Appendix A1):

When the park’s friends group was formed in 2015, the park was not well maintained and gave the incorrect appearance of being un-loved. This section is about the changes to the park since then.

6.1 Improvements on the Ground 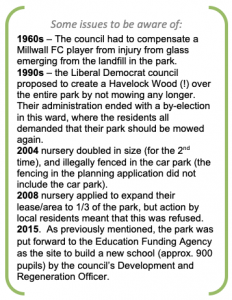 In February 2015, Dr Judy Johns did a biodiversity report on the park, and made some recommendations, which the friends have attended to, though some proposals had to be amended to reflect other things that have come to light since. The full report is in Appendix 3: Biodiversity Report from 2015.

Temporary notice boards were placed at the entrances, having gained special permission, in spring 2015.
In 2017, Idverde started to litter pick it a few times a week in the early morning. This has improved the park and we find that a tidy park discourages dog owners from not picking up.

Trees (broadleaf) were planted to replace gaps in the perimeter planting, but those over the rubble infill of the brick pit, have suffered in dry spell the park suffers from every June, so many are struggling and a few have died. The ones behind the houses on the Havelock side of the Park, have been watered by residents with gates onto the park, and have mostly thrived.

Some spare Scots Pine trees were planted the SE corner, forming a pleasant grove at the end of the hedge, in the winter of 2017. At the time of writing, after re-staking in 2018, they are alive.
The friends have been planting a hedge along the chain link fence, in winters of 2015/6/7 – these whips tend to be thinned out in the June dry-out so this area is getting a natural dispersed layout with a variety of species, provided (and thanks to) Evo Energy.

In spring 2018 it was finally agreed to leave an area of longer grass to provide a meadow area and improve bio-diversity. This meadow area changed (from the one recommended in the Biodiversity Report, Appendix A3). It is narrower against the northern chain-link-fence boundary, due to wanting benches to be attractive/accessible) and added around the trees on the southern boundary because that was the only part with the original London Clay underneath.

Dogwood (coloured) was planted at Homesdale road entrance, though there are gaps that need replacing.

In 2018 the friends restored the Canadian High commission plaque in memory of Patricia Ann Drennan that was removed when the nursery expanded.

6.2 Improvements with the Park’s status

When it was announced that a school would be built on the park, the friends applied for Town Green legal status for the park, but the council refused to register it.

However, the park was registered as a Local Community Asset (number 18 for Bromley) under the Local Government Act.

In 2016 it became possible to register parks (among other sites) as Green Spaces and the friends successfully applied for this.

The following improvements to the park, have been carefully considered by the (Friends of Havelock Rec) committee, and plotted on the following map of the park (please see our page with the Friend’s Vision Statement):
Map of proposed improvements (work already carried out, is greyed out): 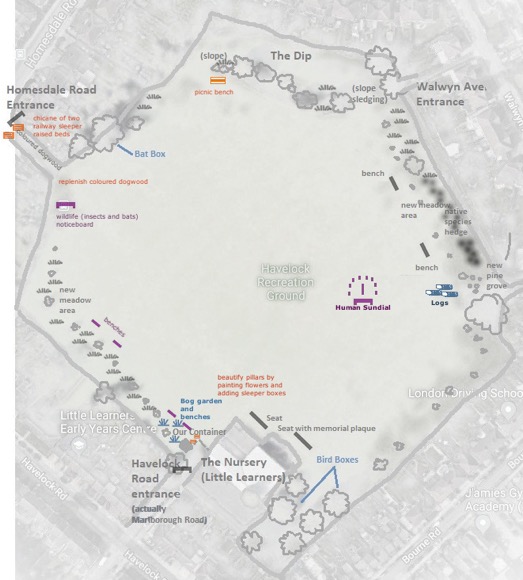 8.1 First cut at timescales for these proposals:

A plan of the timeline for the Friend’s proposals, and completing the work already started.
It is possible that a fitness equipment/trail could be added, as there appears to be funding for it under Healthy Lifestyles Schemes, and it might be able to include a perimeter path.
The container café idea is not included as there isn’t anyone with spare time to pursue the idea, it would require considerable effort to coordinate volunteers to man.
If either of these schemes materialise then the Friends will see if it’s possible amend the Management Plan.

Here’s the result of our SWOT analysis for the park:
(SWOT – below – SMART Specific, Measurable, Achievable, Realistic and Time-bound)

Some differences of opinion that came to light from the surveying:
• Some remonstrations between parents and dog walkers, where children find dogs scary and dogs find children scary
• Disagreements as to whether a dog off the lead is allowed or under control
• Concern that a perimeter path might allow children with bikes and scooters to ‘push’ less able people off the path and frighten nervous dogs into running/barking.
Note: in this park, the received wisdom about having gates from resident’s gardens into the park, is the opposite of our findings: rubbish is tipped by (renting) people who have unkempt fences and rough vegetation areas behind their properties; whereas those with gates take a proprietary interest in the field and are more involved. None of them have dumped rubbish behind their gates.
On discussion, a few of the more elderly park users wanted some car parking that is not in the permit zone (because we are on the edge of a zone, and some people two roads away are in a different zone). They felt that by the time they’d walked from their house, they were too tired to then actually enjoy the park. One of these had conflict with the nursery manager on this issue. The nursery fenced off the park’s car park in 2002/4 without consultation or notice (the planning permission was entitled ‘Single Storey Extension’) to the residents (and contrary to their planning permission at LBB planning portal page)

Practical Management Plan for the Year

Please see the idverde statement in appendix A6.
Other parks in the town ward have bi-monthly meetings with their park officer. This sounds like it would be a useful thing to have for our park too; perhaps every six months?

Please see the idverde statement on sustainability, in appendix A11

The friends would welcome a regular meeting to inspect park, troubleshoot issues, and review the plan. Other ward parks meet with their park officer on a monthly basis, but as the Friends consists principally of volunteers who hold full time jobs (or are working around the needs of small children and/or school runs), it might be more practical to meet 3-monthly (if that is possible).
This document is expected to last for 10 years, but it is felt that it should be reviewed, updated, and amended every two years. This would then incorporate any changing situations.

The Table of Contents in the document, which can be downloaded as .pdf here: Havelock Rec Management Plan v1 Nov2018 lowres

HAVELOCK RECREATION GROUND 1
1. The Park. 1
2. About This Plan 2
3. Demographics 3
4. History and Heritage 4
5. Social Links 5
6. Summary of improvements since 2015 5
7. Policy and Strategic Context 6
8. Plans to improve the park: 6
9. Site Management 12
10. Sustainability 12
11. Document review and site / work review 12
Appendices: 14
Appendix A1: Analysis of Survey Results: 15
The full text answers to “What would you particularly not want to see in the park?” 17
Appendix A2: Friends of Havelock Rec Vision Statement: 18
Appendix A3: Biodiversity Report from 2015: 19
Appendix A4: Analysis of 2011 census data from Streetcheck: 21
Appendix A5: Example of a joint monitoring inspection sheet. 25
Appendix A6. iDverde’s management procedures & plan: 25
Appendix A7 – Policy and Strategic Context 27 Promote Healthy Communities 27
Appendix A8.1 – Map of Local Park and the local Green Space Deficiency 30
Appendix A8.2 – Entry for Havelock Rec in the Draft Local Plan: 31
Appendix A9 – London Borough of Bromley Biodiversity and Arboriculture: 32
Appendix A10 – iDverde statement on park users and staff: 34
Appendix A11 – Idverde’s Sustainability policy 37
Appendix A12- Idverde’s Foreword & Introduction 37