One of our ward councillors, Nicky Dykes, has posted about saving our park on the local conservative’s site, she tells us:

We are delighted to announce that our councillors tell us that they will not allow the Education Funding Agency (EFA) to build on our park: 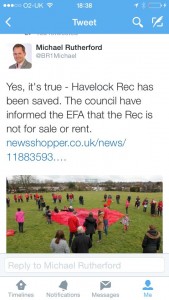 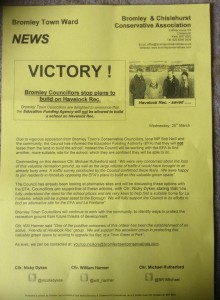 Nicola Dykes, one of our Ward Councillors, wrote “Due to considerable opposition from Bromley Town Councillors, local MP Bob Neill and the local community, the Council has informed the Education Funding Authority (EFA) that they will not lease them the land to build the school. Instead they are working with them to find an alternative  site for the school which they are confident they will be able to do.

Commenting on this decision Cllr Michael Rutherford said: “We were very concerned about the loss of this valuable recreation ground as well as the large volume of traffic it will bring to an already busy area. A traffic survey conducted by the Council confirmed these fears.  We were happy to join residents in forcefully opposing the EFA’s plans to build on this valuable green space”.

Please see the rest at: http://www.bromleytownconservatives.com/