Friends of Havelock Rec got some good news today. Here’s the post from http://www.bobneillmp.co.uk/ 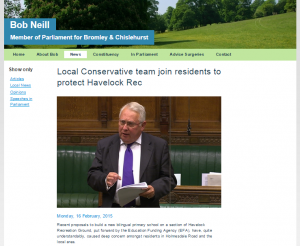 Monday, 16 February, 2015
Recent proposals to build a new bilingual primary school on a section of Havelock Recreation Ground, put forward by the Education Funding Agency (EFA), have, quite understandably, caused deep concern amongst residents in Holmesdale Road and the local area.

La Fontaine Academy, which opened last September under the Government’s Free School policy, is currently in temporary accommodation at the site of the former Princes Plain School. Although there is of course a need to find a permanent home for La Fontaine, I remain unconvinced that Havelock Rec offers a suitable alternative for anyone involved, including pupils, staff, or indeed local residents. At the end of the day, we have precious little green space in the Borough, and what we do have should, I believe, be protected wherever possible.

These sentiments have been confirmed by the recent survey the local Conservative councillors in the Bromley Town ward – Nicky Dykes, Will Harmer, and Michael Rutherford – carried out in the surrounding area. An overwhelming 90 per cent of the responses objected to the proposals, raising very genuine concerns about the loss of a valuable open space, as well as the increase in traffic a development of this size could cause.

The plans were due to be discussed by the Council’s Executive Committee last Wednesday, but as a result of the resounding no expressed by residents, were removed from the agenda. I fully support this move, and feel there is an ongoing need to engage with local people on the matter, listening to their views and ultimately supporting whatever future they would like to see for Havelock Rec. The local team have done this so far, and their swift action to take the plans off the Council’s agenda will ensure residents have the time they need to have their say on the proposals. More surveys were delivered over the weekend, so please do keep responding to them.

The Bromley Town councillors and I are all in favour of a new school to serve the growing demand in Bromley, but there can be no doubt that Havelock Rec is absolutely the wrong site. I have been working alongside Lord Nash – the Minister responsible for schools – and the EFA for the best part of two years to set-up and develop La Fontaine into the community asset it is, and going forward, will continue to do so to find a suitable, permanent location for the school.