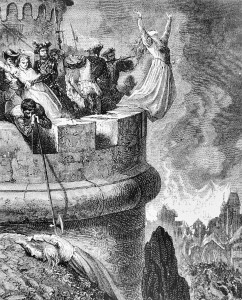 Named after Peter Waldo, founded a sect of Christianity, which the Pope then condemned for Heresy  :

At about this time, Waldo began to preach and teach publicly, based on his ideas of simplicity and poverty, notably that “No man can serve two masters, God and Mammon” accompanied by strong condemnations of Papal excesses and Catholic dogmas, including purgatory and transubstantiation, while accusing them of being the harlot from the book of Revelation.[4] By 1170 he had gathered a large number of followers who were referred to as the Poor of Lyons, the Poor of Lombardy, or the Poor of God who would spread their teaching abroad while disguised as peddlers.[5] Often referred to as the Waldensians (or Waldenses), they were distinct from the Albigensians or Cathari.

His followers relocated to the high valleys of Piedmont to continue their faith until the 14th century.