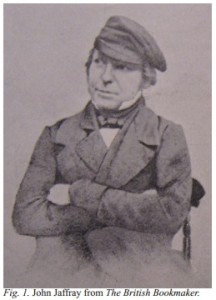 Jaffray Road is named after John Jaffray, a famous Chartist, who collected documents and first-hand accounts of the early trade union movement and book binding trade (he was a finisher).

This collection was donated on his death his to the British Library, shortly before the road was made, and this brought media attention to him.

He was notable for being a committee member of the London Working Mens Association and had been involved in the precursor to the Peoples Charter of 1838.  This had six proposals that moved to allow working men to be elected as MPs by removing the property qualification and introducing pay for MPs.