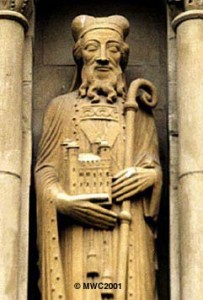 Bishop Gundulph was appointed after he had served as Chamberlain (medieval secretary and ‘fixer’) for the Archbishop Lanfranc (a zealous, pious and politically astute monk and academic originally from Italy).  He had been a monk at Bec Abbey in Normandy (which Lanfranc had been Prior).  William the Conqueror appointed him to be Bishop of Rochester (consecrated on 19 March 1077) and recognised his talent for architecture and engineering, employing him to construct  the White Tower (the main showpiece and defence of his new Tower of London).  Later Wililam Rufus (the Conqueror’s son) he built Rochester Castle.   “Gundulf is accepted as the first King’s Engineer.  Because of his ‘military’ engineering talent, Bishop Gundulf is regarded as the “father of the Corps of Royal Engineers“, military engineers of the British Army” (Wikapedia).

(Photo, from Wikapedia, of his statue on the West Door of Rochester Cathedral)